I realize that I’ve become like an absentee parent to this blog. I realize, yet I can’t seem to do anything to stop it.

I haven’t really even been that busy since moving into my new house. 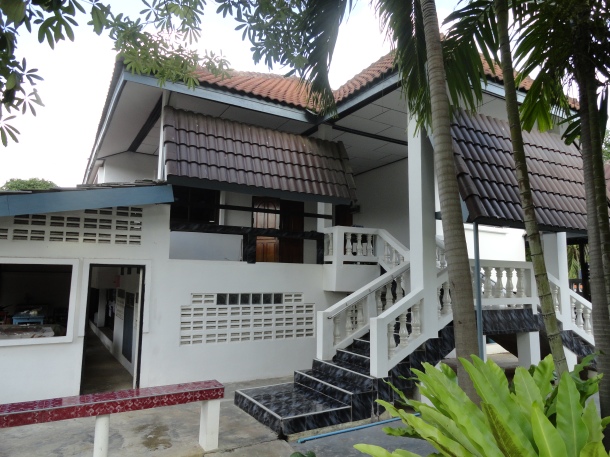 Yep, that’s right. I got out of the pint-sized apartment in the middle of new town Lop Buri and moved out to the ‘burbs into a house with a garden (and pond). The whole top floor is ours, with a proper bedroom, another partitioned bedroom, kitchen and living area – and it’s cheaper than what we were paying (combined) at “Saiva Mansion.” Now we’re literally living in a Thai suburb. The neighbourhood isn’t that wealthy and I’m usually the only farang at the Tesco market. I’m getting the stares that I thought I would get moving to a non-touristy town.

END_OF_DOCUMENT_TOKEN_TO_BE_REPLACED

While I’m in the process of planning to move towns, I thought I’d reflect on some of the things about Thailand that make me instantly miss home. Things that I see or do that without hesitation or actual thought process can cause a pang of sadness.

There was a time a couple weeks ago that the group of us from the course were eating dinner at a Western restaurant for the first time in what felt like forever. They actually brought us a fork and knife(!!?!?!) wrapped in a napkin. This is unusual for two reasons: napkins in the customary folded in four, thick cottony soft facial tissue are hard to come by in Thailand. Everywhere has a roll of toilet paper in either a plastic or rattan container. Completely useless for anyone who either makes a serious mess when eating (uhhhh, ME) or is used to paper that doesn’t crumble when anything wet touches it, leaving streaks of paper all over your face and hands. Considering I had been complaining for weeks about the lack of real napkins, I used that napkin until the last drop of ketchup was gone from my face and my hands were insanely clean of all sticky cheese mess. (Yeah, I had a cheeseburger in Thailand and it was like eating chocolate for the first time, I missed them so much)

The second reason it’s weird is that I hadn’t seen a real knife in about the same amount of time. Thai style is to use your fork to scoop everything onto your spoon, only barbarians stab things with forks. The only time you’ll see these items in a restaurant in Thailand is if they cater directly to farang, and even then I’d only ever seen it at one of my few breakfasts when I would use it to smear jam on my toast.

On the topic of food, I miss cooking my own food. I miss grocery shopping in the sense that I could make a list (<3) and plan out all my meals for the week, including leftovers and lunches. Trying to cook here is a pain, considering that I don’t even have a kitchen, but it really is more expensive than eating out every night. The difference ends up being hundreds of baht. Considering that a Thai meal could cost 35 – 60 baht at any of the restaurants or street vendors in town, cooking just doesn’t add up when some ingredients cost that much or more. Eating out every night at home would be absurd, but I miss being able to make random snacks. I’ll have to satisfy myself with peanut butter and jam sandwiches and instant noodles.

It’s not in my room. Enough said. I’m being a princess, but this I cannot get used to.

Chill in the air

Vietnam was a weird cold– I don’t know how to explain it, but there’s just something about the smell in the air during a Canadian winter that makes me heart melt. It smells like home. I predict that the thing I’m going to miss most about home is the changing of seasons, as opposed to varying levels of heat.

Doing my own laundry

I used to hate doing laundry at home. But there’s something about going through my own clothes that is oddly comforting… I still don’t feel too good handing over a bag of my unmentionables and seriously sweaty clothes to some poor old lady. Luckily, all she has to do is throw it in the washing machine, but seeing my underwear neatly folded together and my socks paired makes me oddly miss my separated laundry hampers of clean and  dirty clothes that I keep at home. (Yeah, folding only happens when I feel like it – so I should be welcoming this as the luxury that it is!)

I don’t want to continuously talk about how much I miss my family and friends, – because I seriously do! – but when something exciting or newsworthy happens, it takes everything out of me to not pick up my phone and call people. First of all, the time difference makes it that much harder as when I would generally want to call people (my afternoon) would be the middle of the night at home. Second of all, it costs almost a million baht to do so, and I need to be saving pennies (satang) until I can land a steady job. I can see myself gradually giving in to this more in my near future.